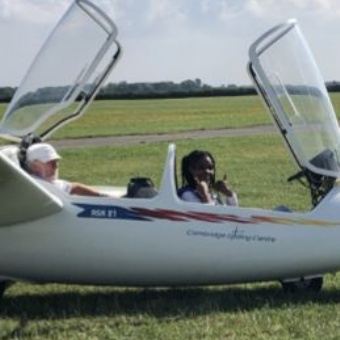 On arrival, we could see the gliders that we would board later that day surprising everyone as students genuinely thought we would be holding on to hand gliders for dear life. Firstly, Jonathon (our instructor) debriefed us on health and safety. Then he took out a parachute…an actual parachute. Again, no one expected to be jumping out of gliders in the case of emergency –  fortunately, they were not used.

A test run showed a glider attached to the plane via a strong rope which pulled the glider into the air, within after 5 minutes the glider would be 600 meters/2000 feet. At that height the glider releases the rope and stays airborne using hot pockets of moisture. They find these pockets through clouds as they are formed through moisture. Our first victim was Khafayat.

She would bravely step in the two-person cockpit and was strapped in by her trained co-pilot Ed. We watched as her glider took off and was airborne within less than a minute, shrinking in the distance. After 20 minutes she landed and described the experience like a rollercoaster. Everyone thereafter was rearing to go and one by one they got into their gliders, strapped in and took off with no problems.

I was last to go and my excitement was through the roof. Strapped with a parachute on I sat in the glider and was instructed on how to pilot…that’s right, we had control (with supervision of course). Once the cockpit closed the plane pulled us along and shortly after I was high in the skies.

After we dropped the rope, Ed gave me control. It is astonishing how one joystick could maneuver £100,000 worth of tech and so effortlessly as well. It was not like your average airline ride, hardly any turbulence and only the sounds of wind and my co-pilot could be heard. We reached 2500 feet, even the shard was visible from our view and that was miles away. The massive airfield below looked like patchwork on a scarf, every plot of land could be distinguished and it was breathtaking.

After 20 minutes of cruising altitude we landed, surprisingly it was a lot less rough than your usual airbus and fully came to a halt in under a minute. Finally grounded, we thanked them and headed home.